Something about the South Carolina Lowcountry seems to beckon my husband, Scott, and me. Perhaps it’s the vision of white verandas shaded by live oaks whispering in the sultry breeze, the dancing blue sparkle of coastal waters, the bounty of fresh seafood and the never-ending stories the culture has to share. So when planning our next getaway, we decided Mount Pleasant was the ideal place to satisfy our yearning because of its intriguing historical sights, inventive chefs and leisurely lifestyle where we would savor the Lowcountry atmosphere. 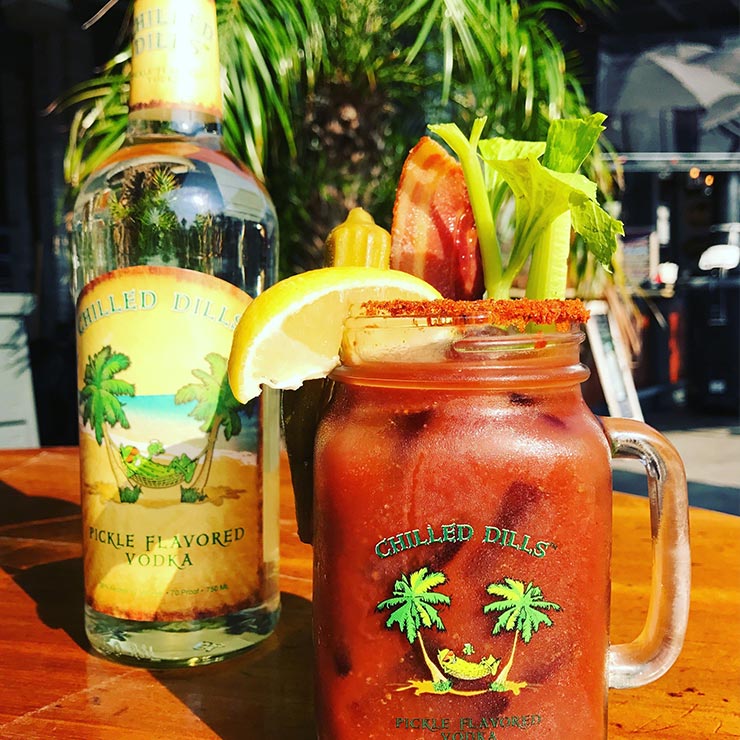 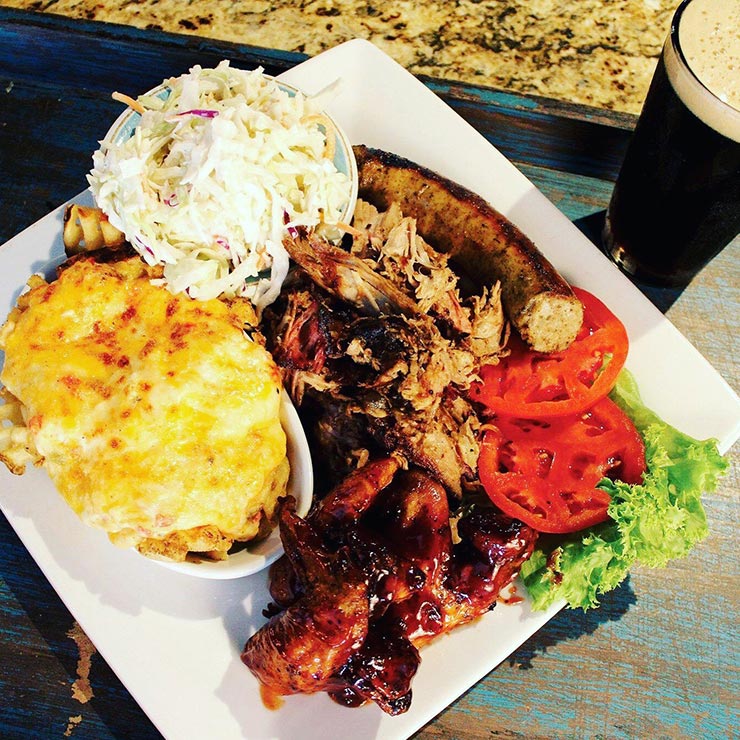 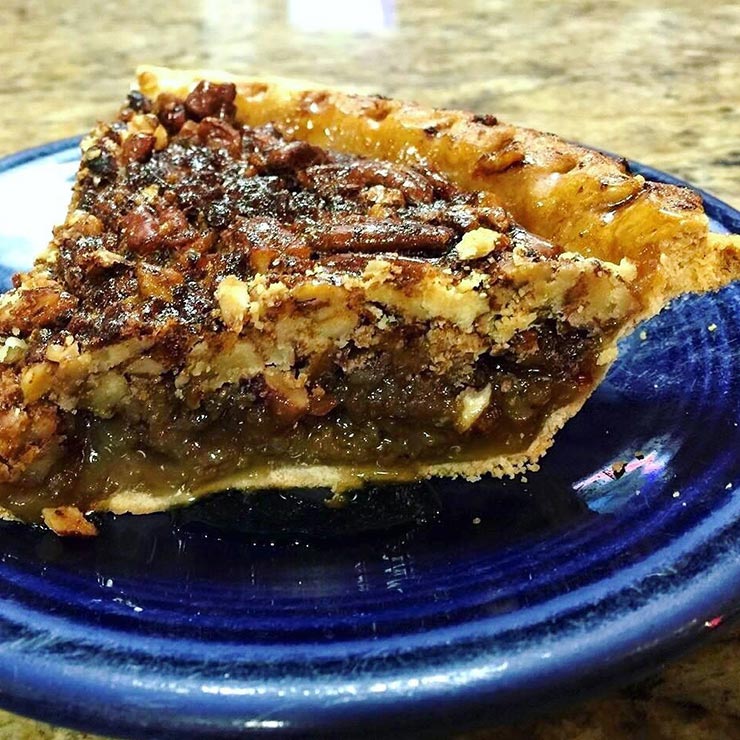 Crispy Southern staple: fried green tomatoes
There was no doubt we had chosen a good place to indulge our love of Lowcountry cuisine.

A meal to wag about

After checking into our hotel the first night, we kicked off our Mount Pleasant visit at Page’s Okra Grill, a popular dog-friendly eatery known for its over-the-top Bloody Marys in mason jars garnished with bites of fried okra, shrimp, crab claw and crispy bacon skewered on swizzle sticks. As we settled at our table on the patio beneath an inviting portico next to the restaurant’s herb garden, I nudged Scott and motioned to the ground. A well-mannered dachshund happily lapped from her water bowl.

Before coming to Page’s Okra Grill, we had seen numerous reviews online raving about the Redneck Rolls, so we ordered a plate. This appetizer was a Lowcountry twist on spring rolls made with wood-smoked barbecue and that classic Southern favorite, pimento cheese.

“I could happily make these my main course,” Scott said after one bite.

As we sipped on our drinks, we got a kick out of watching people take turns climbing into a giant turquoise Adirondack chair next to the patio for novelty photos.

When it came time for entrées, I chose buttermilk fried chicken salad with pickled okra, sweet red onions, black-eyed-pea relish and pepper jack cheese. Scott chose one of Page’s Favorites: the seafood platter loaded with fried flounder, jumbo crab cake, fried shrimp and hush puppies. There was no doubt we had chosen a good place to indulge our love of Lowcountry cuisine. 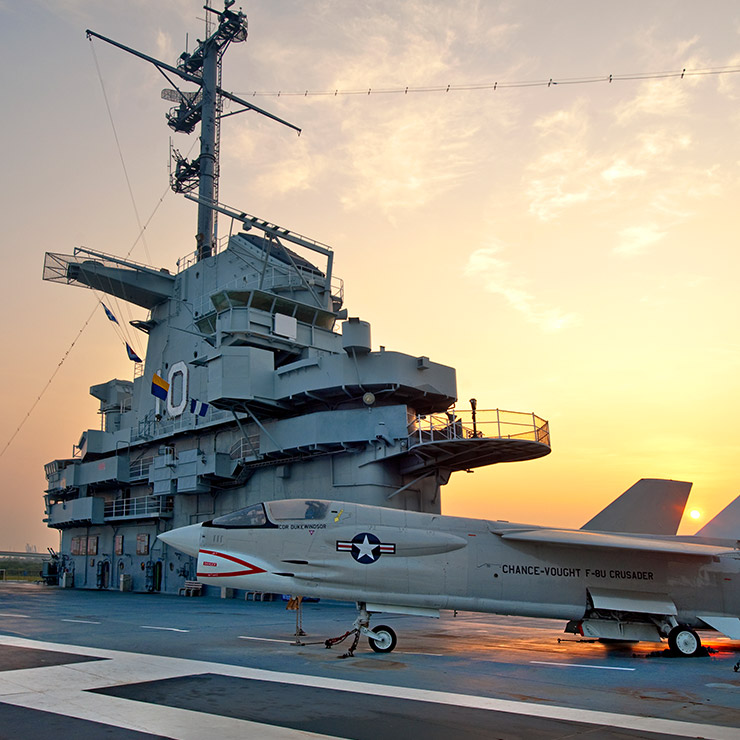 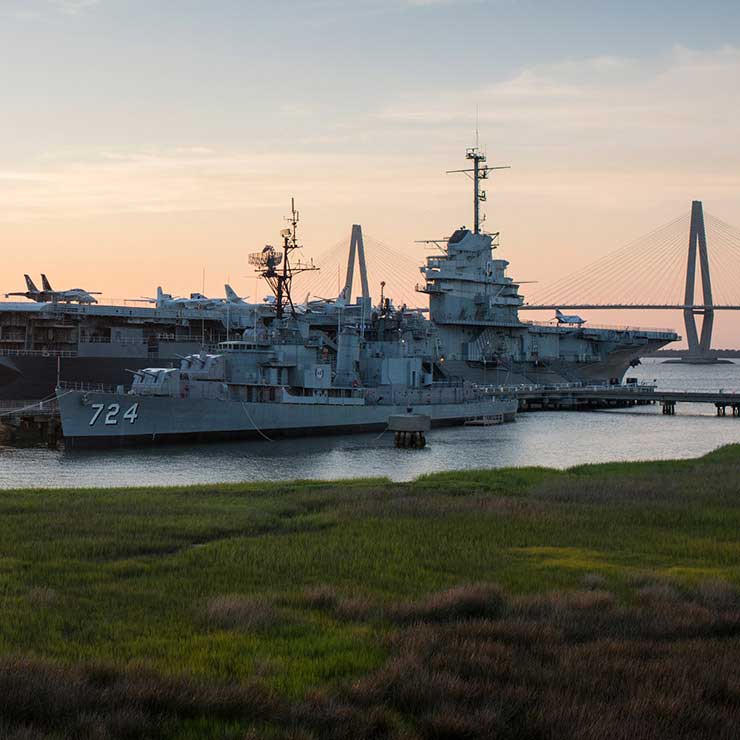 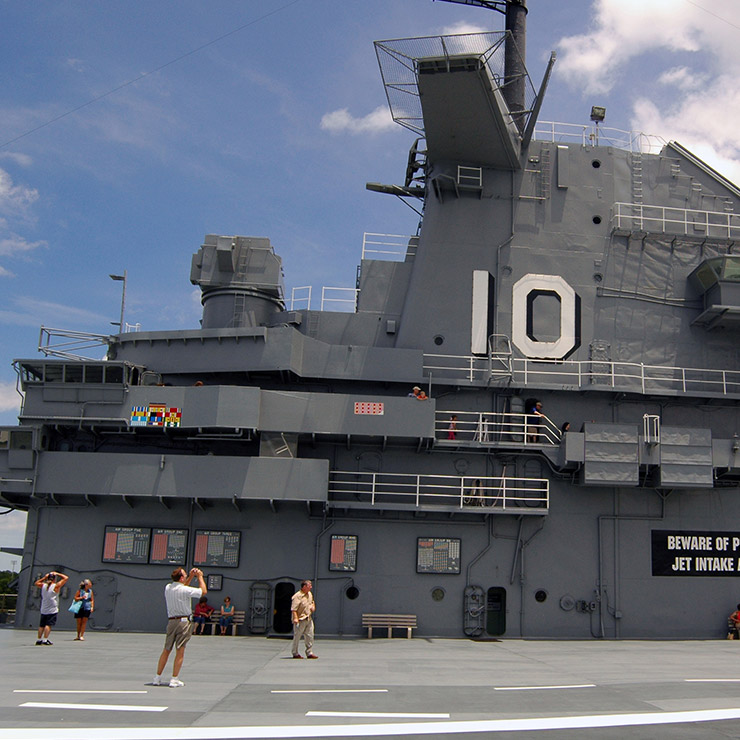 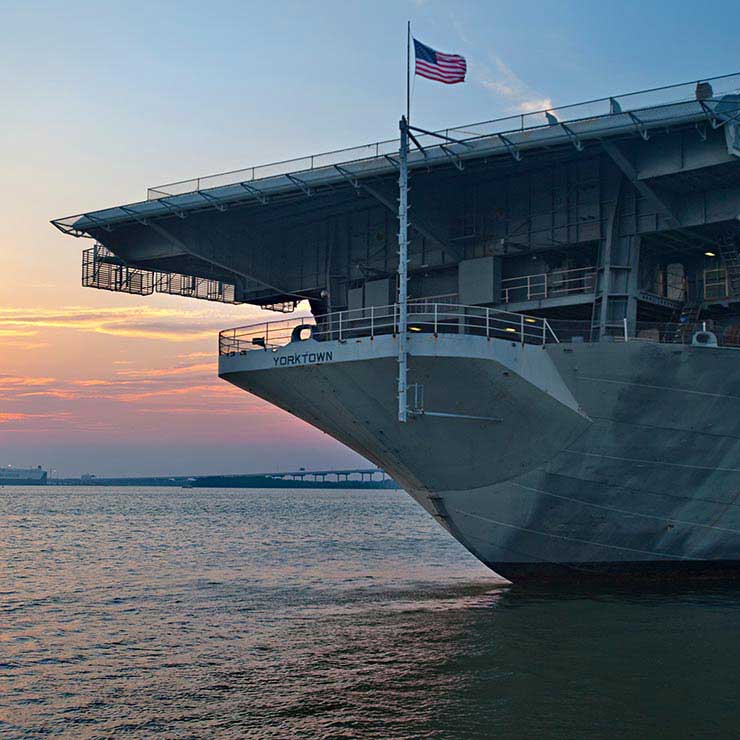 A lesson in patriotism
One of our high points was snapping a selfie in the Captain’s Bridge that overlooked the beautiful blue expanse of Charleston Harbor.

The next morning, we headed out to tour Patriot’s Point Naval & Maritime Museum. Being an avid military history buff, Scott couldn’t wait.

At the entrance gate to the USS Yorktown, we decided to take the audio tour to get extra context on 100 points of interest. Scott was excited to get up close and personal with some of our military’s legendary aircraft when we reached the flight deck. Several of the volunteer guides were also veterans and took time to share their own amazing stories. As Scott chatted with an Air Force vet about the F-18A Hornet, I gazed in both directions at the runway and imagined what the WWII pilots felt as they launched over the Pacific Ocean with such little room for error.

Over the next two hours, we climbed up and down the ship’s rabbit warren of rooms designed for everything from bomb assembly to baking. One of our high points was snapping a selfie in the Captain’s Bridge that overlooked the beautiful blue expanse of Charleston Harbor.

We topped off our tour of the carrier with the Apollo 8 Mission Exhibit. The USS Yorktown had recovered the capsule and its three astronauts from the ocean in 1968 after their return from orbit. We were able to climb into a model of the original capsule and vicariously experience that mission through the actual radio communication and pictures from takeoff, orbit and landing.

From there, we boarded the destroyer USS Laffey, nicknamed “The Ship That Would Not Die” because it survived the most harrowing kamikaze attack in WWII. I had chills during the Gunmount 53 exhibit, an astounding simulation with actual footage from the 80 minutes when sailors spun the turret gun around trying to destroy planes dive-bombing the ship.

In the end, the time we devoted to all the Patriot’s Point exhibits added up to a phenomenal experience we will never forget. 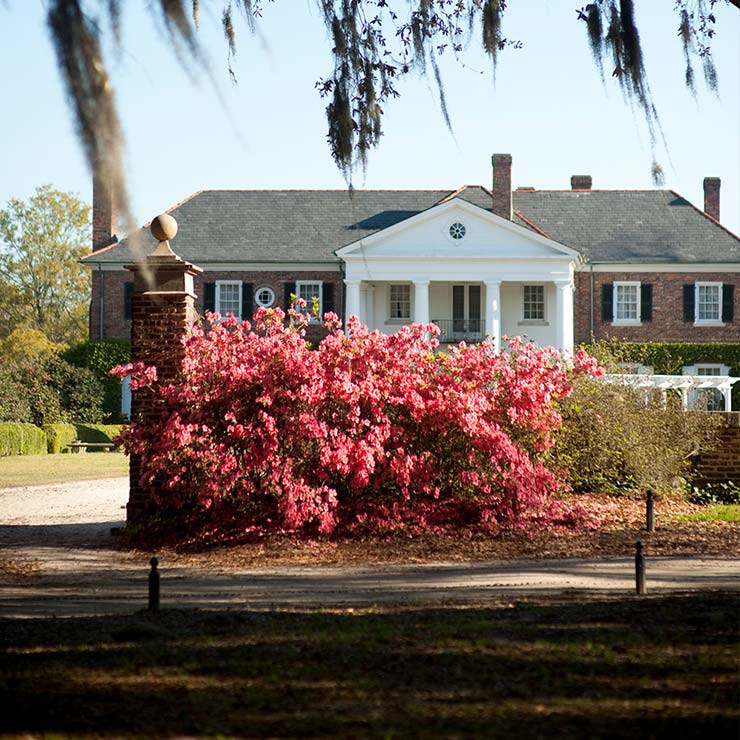 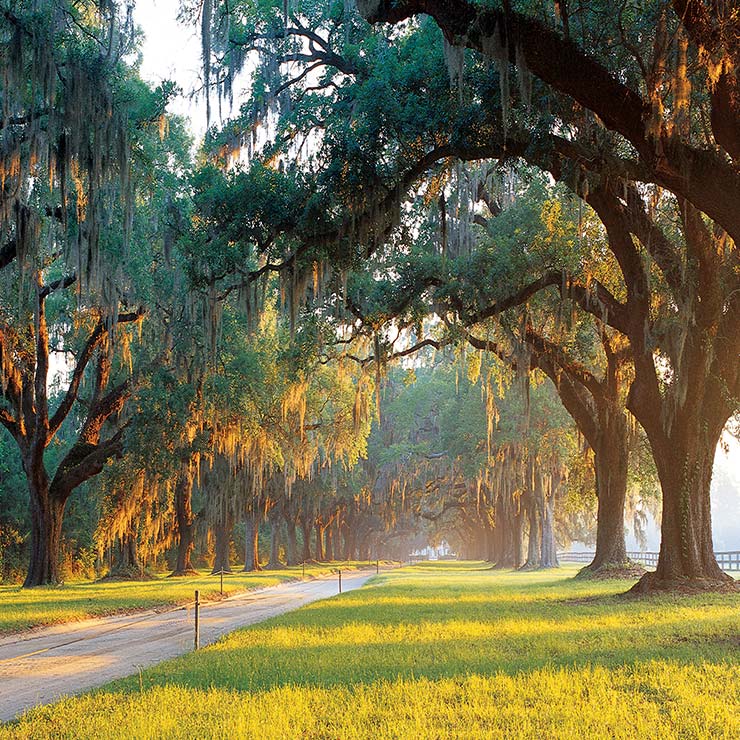 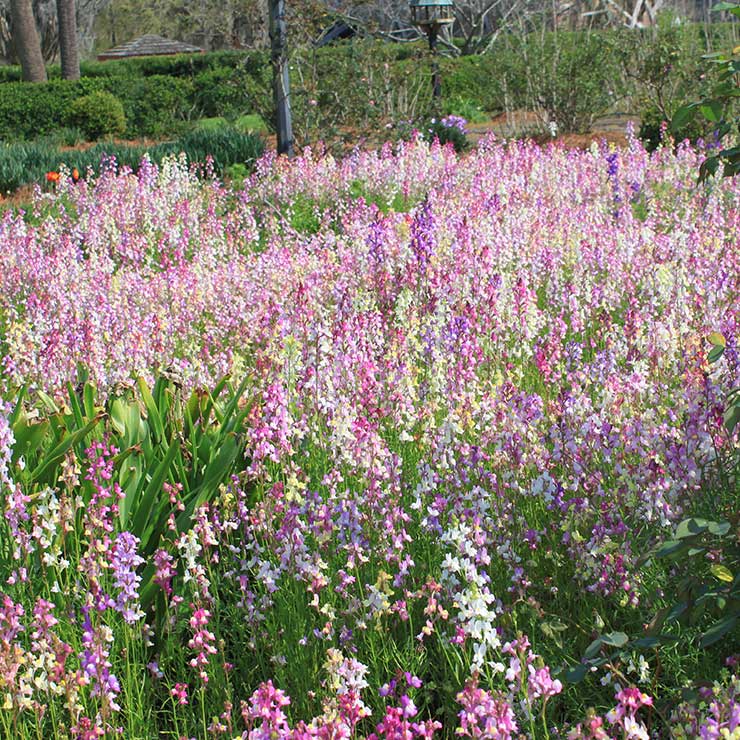 Insight into the past
One of the guides, a local volunteer, told us this tradition continues today with fresh produce that the plantation sells across the road at its own store.

The next day, we took a step back in time wandering around Boone Hall Plantation & Gardens, advertised as America’s most photographed plantation.

“I can certainly see why,” I remarked as we meandered up the Avenue of Oaks, which led to the mansion. I snapped pictures of the magnificent oak trees draped in garlands of Spanish moss that lined both sides of the path, with their graceful boughs almost touching.

The plantation was founded in 1681 by Englishman John Boone as a working farm that grew cotton and pecans, although the current house only dates back to 1936. One of the guides, a local volunteer, told us this tradition continues today with fresh produce that the plantation sells across the road at its own store. Boone Hall Plantation is also the only South Carolina Lowcountry plantation with a live theatrical presentation exploring the Gullah culture adapted by African slaves, a performance we found fascinating. I enjoyed learning about the influence of their communal tradition of singing and storytelling.

We spent the remainder of our visit in the flower gardens, exploring herringboned brick paths from colonial days that wind through spacious green lawns bordered with perennial flowers and English boxwood hedges. We were lucky to be there at the right season to catch the plantation’s famous century-old antique roses in bloom. 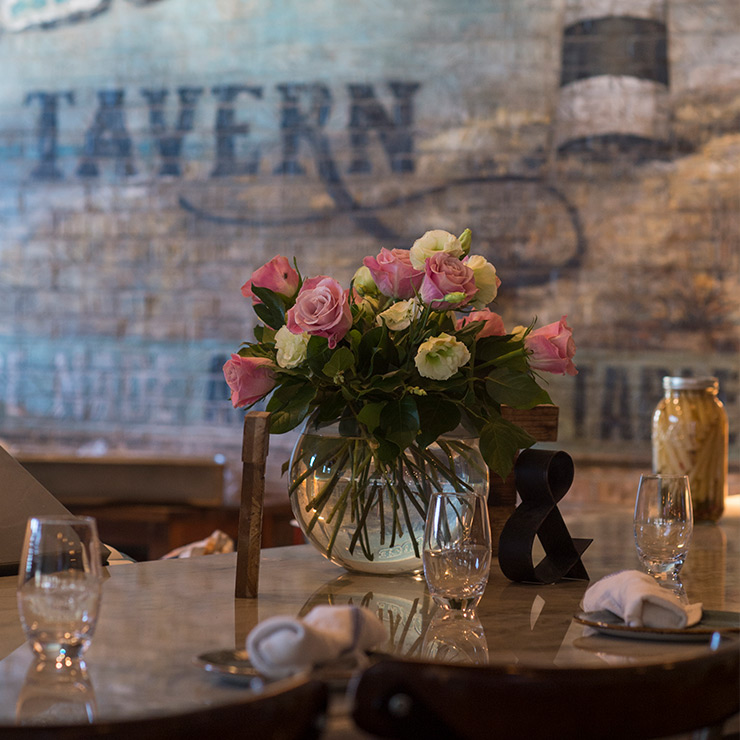 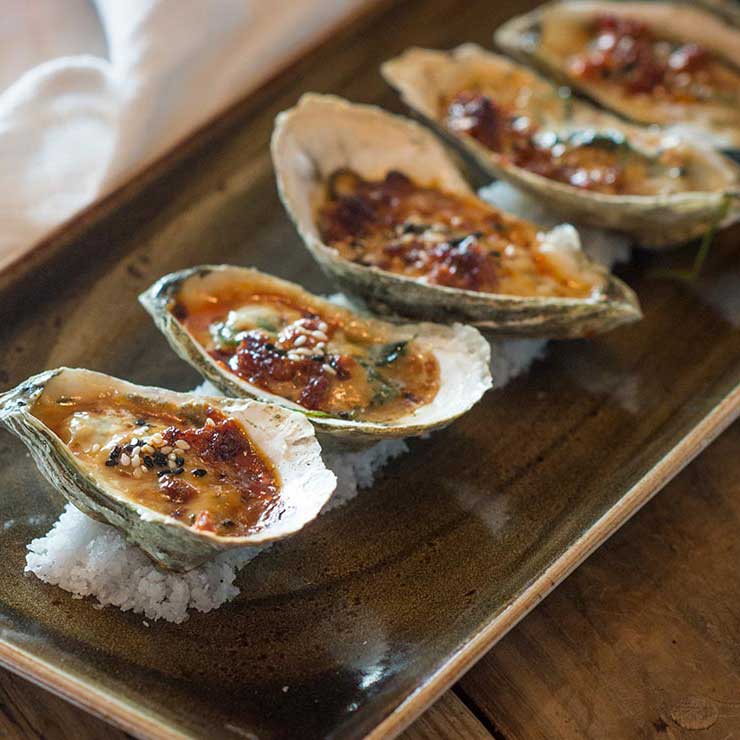 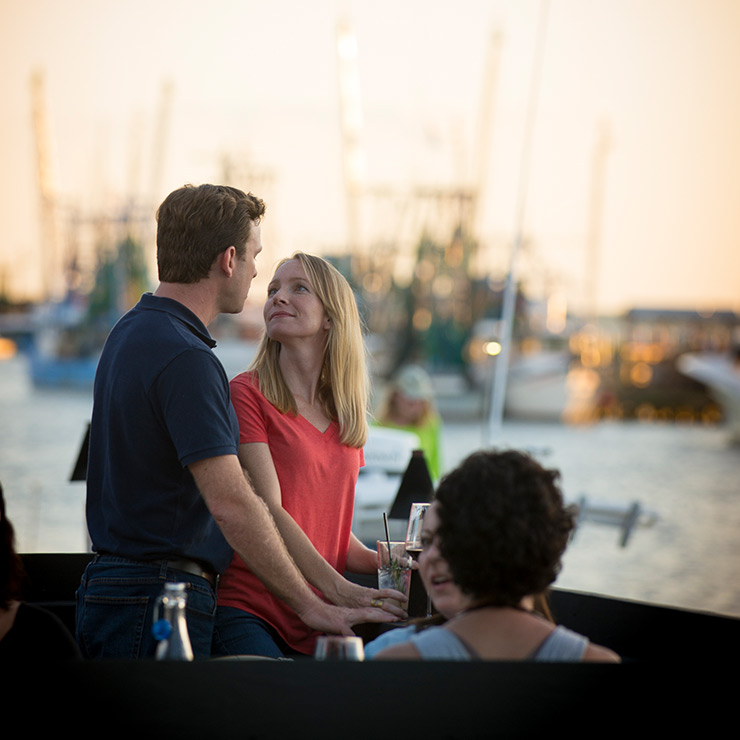 Refreshing cocktails on the Tavern & Table patio
We visited South Carolina’s Lowcountry to get a taste of a laidback Southern lifestyle, and Scott and I agreed that Mount Pleasant had definitely delivered.

Sunset dinner on the water

On our last night we reserved a dockside table at Tavern & Table, one of Mount Pleasant’s most notable restaurants, on Shem Creek. As a lovely breeze came up over the water, we both chose local drink specials. I had a Blueberry Sage Sangria, and Scott had a draft Westbrook White Thai, a local beer with refreshing and spicy zest. We warmed up our appetites from the snack menu. I began with deep-fried deviled eggs. Scott zeroed in on the pimento cheese again, this time with bacon jam. I followed up with my Lowcountry favorite—shrimp and grits, only this version featured Spanish chorizo and a flavorful Moroccan sauce. Scott opted for pan-seared scallops with caramelized onions and bacon spaetzle.

As the sun slipped into the rosy horizon, we reflected on our trip. We visited South Carolina’s Lowcountry to get a taste of a laidback Southern lifestyle, and Scott and I agreed that Mount Pleasant had definitely delivered. It was a never-to-be-forgotten experience that resonated strongly with us, and I knew we’d treasure those memories.